A natural healing art based on the principle that there are reflexes in the feet which correspond to every part, gland and organ of the body. By stimulating more than 7,000 nerves during a treatment. Benefits: deep relaxation & stress relief. Helps over and under active glands and organs to return to their normal functioning level.

Reflexology Dates Back to Ancient China

Reflexology is a modern Western therapy in which pressure is applied to distinct areas of the feet. However, this form of foot massage therapy has been practiced in different parts of the world for many centuries. The Chinese practiced various pressure point therapies over 5,000 years ago. The ancient Egyptians were also aware of a method of treatment similar to reflexology. Reflexology methods were also known to have been practiced in both India and Japan. In 1582, a European book on zone therapy was published by Dr. Adamus and Dr. Atatis. However, it was Dr. William Fitzgerald, an American ear, nose and throat specialist at Boston General Hospital who developed his own method of zone therapy which was published in 1917.

The Sole is the Gateway to Your Soul 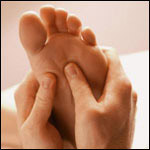 Reflexology is based on the existence of a system of ten longitudinal zones that extend from the feet up the legs and up the body to the head and down the arms to the hands. Within the zones, there is .a flow of energy which runs through every part of the body.

Reflexology is a focused pressure technique usually directed at the feet or hands. It is based on the premise that there are zones and reflexes on different parts of the body which correspond to, and are relative to all parts, glands and organs.

You will Feel Great in Less than an Hour

To start with, our trained therapist will give you a complimentary neck massage while your feet soak in a tub of warm water. For the foot massage, you’ll sit in a comfortable chair with your feet raised and your back supported. The treatment involves applying pressure to the precise reflex points with the tip of the thumb or finger. The pressure applied is firm, but not heavy, and different sensations will be felt by the person receiving the treatment, which will last from 45 minutes to an hour. Although improvement may occur after just one treatment, it is important to have a course of at least one treatment per week and no less than two treatments per month to ensure that the improvements achieved are maintained.

One of the most common reasons for ill health is stress. The effects of the pressures of daily life are the number one cause of stress, which affects us all in different ways.

Many of us develop physical problems, including headaches and migraines, backaches, digestive disorders or a weakened immune system.

Although reflexology cannot prevent the stresses caused by every day life, it can help us to cope better by being more relaxed.