Ear Candling is a natural, non-intrusive procedure that may help alleviate the painful effects of chronic headaches or sinus conditions, ear infections, allergies or vertigo, as well as minor hearing loss due to excessive earwax built up. Ear candling improves your hearing, smell, taste and vision. It also detoxifies the sinus and lymph system.

How is Ear Candling Done?

Ear candling requires the use of ear candles. Ear candles are made of cotton or linen that’s wound into a cone shape, soaked in wax, and then allowed to harden.

This hollow candle is inserted through a hole in a plate specially designed to collect wax, and placed into the external ear canal. The candle is lit at the opposite end.

Proponents of ear candling claim that this creates a low-level vacuum that draws ear wax and other debris out of the ear and into the hollow candle. After the procedure, a dark, waxy substance is usually left in the stub of the candle.
Many people find it to be a satisfying procedure, because they are told that the dark waxy mass they see is a combination of ear wax and debris. 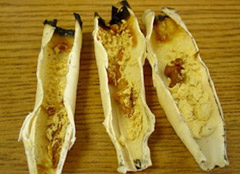 Proponents of ear candling claim that it can help to remove ear wax and debris from the ear and facial sinuses. The external ear canal, however, is not continuous with the middle ear, sinuses, Eustachian tube, and nasal passages when the ear drum (tympanic membrane) is normal and intact.

Other manufacturers claim that smoke from the burning candles dries out the ear canal and stimulates the body’s natural excretion of wax and dead cells, pollen, mold, parasites, and other debris.

There is no evidence supporting these claims. Critics contend that the dark, waxy debris that remains after ear candling is waxy candle remains, not ear wax.